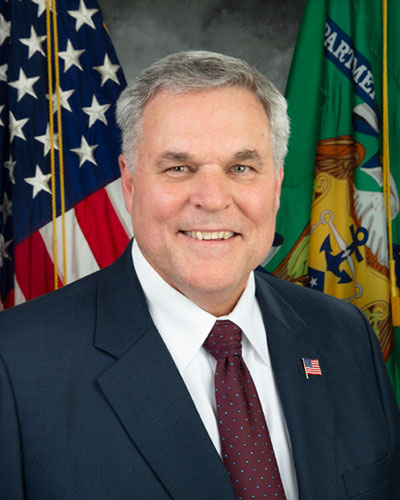 Charles P. Rettig is the 49th Commissioner of the IRS. As Commissioner, Mr. Rettig presides over the nation’s tax system, which collects more than $4.1 trillion in tax revenue each year representing about 96% of the total gross receipts of the United States. In this regard, since this revenue funds most government operations and public services, the continued success of our country depends upon a successful IRS. Mr. Rettig manages an agency of about 80,000 employees and a budget of more than $12 billion.

In leading the IRS, Mr. Rettig has worked to focus attention on the important work of the agency’s employees. “The IRS employees are the absolute strength of the agency,” he notes. “We are proud to be reflective of the diverse communities we serve. Our employees are dedicated and they care a lot, for both taxpayers and the nation.” Since joining the IRS, Mr. Rettig has also been heavily focused on improving service to the nation’s taxpayers, balancing appropriate enforcement of the nation’s tax laws while respecting taxpayer rights, with a particular focus on traditionally underserved communities. Subject to budgetary appropriations, the IRS maintains a strong, visible, robust tax enforcement presence in support of those who voluntarily comply with their filing and reporting requirements. Mr. Rettig has been leading efforts to enhance taxpayer experiences operating “through the eyes of the taxpayer.” These efforts include implementation of the multi-year IRS Integrated Modernization Plan and the Taxpayer First Act.

During the 2020 COVID-19 pandemic, the IRS significantly scaled back operations closing over 90% of its more than 500 facilities to protect the health and safety of the IRS workforce and taxpayers before later shifting into a socially distanced, mostly virtual operating environment. In FY2020 the IRS processed more than 163 million individual tax returns, including more than 125 million individual refunds totaling more than $320 billion. At the same time, within two weeks following enactment of the Coronavirus Aid, Relief, and Economic Security (CARES) Act, the IRS began processing 161 million Economic Impact Payments totaling approximately $271 billion. EIP outreach materials were translated and made available in an unprecedented 35 languages. At the end of 2020, within two days following the enactment of the Coronavirus Response and Relief Supplemental Appropriations Act of 2021, the IRS processed an additional 147 million Economic Impact Payments totaling more than $142 billion.

During the COVID pandemic, as part of a larger effort to reach underserved communities, the IRS pursued a number of aggressive steps to expand information and assistance available to taxpayers in additional languages, including providing the Individual Income Tax Return, Form 1040, in Spanish for the first time. As part of this expansion, the Form 1040 now also gives taxpayers the opportunity to indicate whether they wish to be contacted in a language other than English, many of the pages on the IRS.gov site are now available in multiple languages (last year, there were more than 90 million page visits to non-English pages on IRS.gov), and basic tax information is newly available in 20 languages on IRS.gov. Taxpayers who interact with the IRS now have access to over the phone interpreter services in more than 350 languages. The IRS has also recently begun inserting information about translation services and other multilingual options into the high-volume notices provided to taxpayers. The agency has also been increasing its multilingual outreach on Instagram, Twitter and other social media platforms and plans to continue these efforts on other agency priorities.

Previously, Mr. Rettig was with the tax law firm of Hochman, Salkin, Rettig, Toscher & Perez, P.C., for more than 36 years. In his practice, Mr. Rettig represented  individuals, businesses and corporate taxpayers before the IRS, the Department of Justice Tax Division, federal and state courts and state taxing authorities.

Mr. Rettig has held leadership roles in a number of professional organizations, most recently serving as Vice Chair-Administration, for the American Bar Association’s Section of Taxation, and President of the American College of Tax Counsel. He was a member of the IRS Advisory Council (IRSAC) and served as IRSAC’s chair from 2010 to 2011. He also served as Chair of the Taxation Section of the State Bar of California and has served on the advisory boards of both the Franchise Tax Board and the Board of Equalization in his home state of California.

Mr. Rettig has received numerous professional honors during his career from organizations across the country. He has been a featured speaker and panelist at hundreds of tax conferences throughout the U.S., Europe and Central America and has authored numerous tax-related articles.

Mr. Rettig,  is also active in numerous civic and philanthropic activities. He’s the founder of the UCLA Extension VETS COUNT Scholarship Fund designed to provide scholarships for active duty and retired military personnel who are working to realize their career goals in tax, accounting, wealth management, and other areas of the financial services industry as well as basic coursework for personal growth in budgeting, financial literacy, and investing.