Use of Live FTI in System Testing

The use of live FTI in test environments should generally be avoided and is not approved unless specifically authorized by the IRS Office of Safeguards. Dummy data should be used in place of live FTI wherever possible.

Live Data – as defined in Internal Revenue Manual (IRM) 10.5.8 Sensitive But Unclassified (SBU) Data Policy: Protecting SBU in Non-Production Environments, as production data in use. Live means that when changing the data, it changes in production. The data may be extracted for testing, development, etc., in which case, it is no longer live. Live data often contains SBU. The use of live data in testing environments is limited to tax administration or other authorized IRS purposes and may be disclosed only to those individuals with a need to know.

The disclosure of FTI is restricted to authorized federal, state and local agencies per the provisions of IRC Section 6103, Confidentiality and Disclosure of Returns and Return Information.  As such, IRS Publication 1075 outlines the requirements and guidelines for agencies in receipt of FTI to establish procedures to ensure the adequate protection of the FTI data they receive.

Why Is Live Data Used in Testing Environments?

Live data in test systems allows greater accuracy for the development team to identify potential gaps in the system.  For example, utilizing data that mimics live data can allow the systems development team to cover all conditions for the system changes that need to be tested as well as having other normal production data characteristics to observe near-production state results.  Testing efforts that use live FTI primarily fall into two categories: one-time testing and ongoing testing.

An example of a one-time testing use of live FTI would be for system testing that is done prior to a new system implementation, and once testing has validated the data will work properly the live FTI is not required to continue to remain in the test environment. For one-time testing efforts, Safeguards requires the FTI be deleted from systems and databases upon completion of testing efforts, and that the hard drive of the test systems be cleared electronically prior to repurposing the system for other state agency testing efforts.

Duration for on-going test activities will be agreed upon as part of the live data request process. Some examples of on-going testing efforts include:

System development and pre-production test environments are often not configured to the same level of security as a production system, making them a weak link in an organization’s security posture.  For example, an agency may have multiple business units that share common IT infrastructure, but have unique risk profiles that require varying levels of security controls to be employed due to the unique mission of each business unit.  Through the “least common denominator” concept, a potential adversary levels the playing field by compromising the business unit with the lowest level of information security controls, and then traverses the network to ultimately compromise the business unit processing the targeted sensitive and confidential information.

Applying security controls to the pre-production test environment will allow agencies to take the pre-production test environment out of the equation as the “least common denominator” for security, and proactively integrate compliance activities and security into the SDLC process, resulting not only in becoming compliant with IRS Safeguarding requirements, but also creating a “culture” of security through cost effective application of security controls.

Per IRS Publication 1075, agencies must submit a request to the IRS Office of Safeguards for authority to use live data for testing, providing a detailed explanation of the safeguards in place to protect the data and the necessity for using live data during testing.  The process flow in Figure 2 below provides a flow chart for the steps needed as a part of the live data request process for using live FTI in pre-production systems.

A template is provided on the IRS Office of Safeguards web site for agencies to complete and submit to the IRS.  All submissions should be sent to the IRS Safeguards mailbox: SafeguardReports@irs.gov with the subject line: Live FTI Data Request. 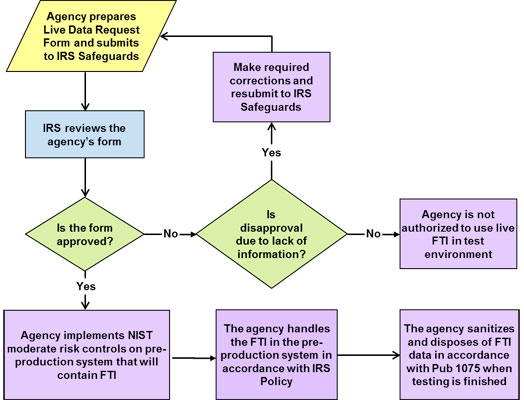 As stated earlier, if approved by IRS, any pre-production system that receives, processes, stores or transmits FTI is required to meet all of the security requirements outlined in IRS Publication 1075. Applying security controls to the pre-production test environment will allow agencies to proactively integrate compliance activities and security into the SDLC, resulting in cost effective security and compliance with IRS Safeguarding requirements.  The following is a high-level description of some of the critical control areas from the Publication 1075: