This includes wireless networks located at the agency’s office or data center where FTI is received, stored, processed or transmitted from; however, this memo does not cover the use of public or personal Wi-Fi networks for remote access to FTI through publicly available or personally owned wireless networks.

As agencies look for ways to reduce their infrastructure costs, wireless implementations are becoming more common, making these protocols imperative. A wireless environment usually takes place in one of two scenarios:

Because of the broadcast and radio nature of wireless technology, ensuring confidentiality and authentication is significantly more difficult in a wireless network than a wired network. WLANs are typically considered less secure than a wired LAN due to weak security configurations that favor convenience of access over security.

In addition to being susceptible to the same threats as the wired LAN, data transmitted via a WLAN is also susceptible to eavesdropping and interception through the air by an attacker within range of the wireless transmission, wherein the attacker passively monitors network communications for data, including authentication credentials.

In addition to eavesdropping, another common threat against wireless networks is the deployment of rogue wireless devices for masquerading or man-in-the-middle attacks. An attacker could deploy a wireless AP that has been configured to appear as part of an agency’s wireless network infrastructure, which would circumvent perimeter security controls, provide the attacker a backdoor into the wired network and allow the attacker to actively impersonate a legitimate AP and accept client connections.

Managing WLAN security is a complex and dynamic task that poses new challenges to network and security administrators.  Agencies contemplating using FTI in a WLAN deployment can mitigate many of the WLAN security risks by developing a security policy with a strong set of security requirements that must be satisfied before deployment.

The security of a WLAN is heavily dependent on how well each WLAN component is secured throughout its lifecycle. A WLAN deployment typically consists of these components: Access Points, Client Devices, Firewalls and Wireless Switches.  Any external facing Access Tier components such as web servers and interface servers must be placed behind filtering devices in a Demilitarized Zone (DMZ). 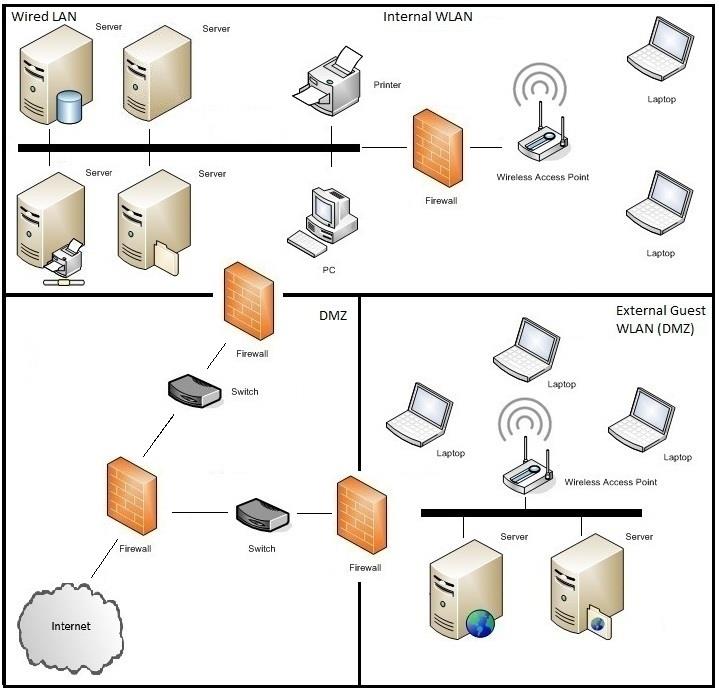 Mandatory Requirements for FTI in a Wireless Environment

To utilize FTI in an 802.11 WLAN, the agency must meet the following mandatory requirements:

The WLAN management controls fall into the categories of policy and procedures, device inventory and baseline configurations.

Developing strong security policies and procedures is the first step in ensuring protection of FTI in a wireless network. Policy and procedure must cover management and monitoring of the WLAN, including topics such as training, acceptable use, encryption, passwords, identity, client device security and privacy. Agencies must have policies that clearly state which forms of connections are permitted or prohibited for their WLAN client devices under various circumstances. Agencies must enforce these policies through the appropriate security controls.

These guidelines must provide a complete inventory of all wireless system components such as access points, wireless switches, client devices and any other equipment within your WLAN. The inventory must be updated on a periodic basis, at a minimum annually, to account for device changes.

Unless the WLAN is encrypted, anyone with physical access to it could potentially connect network monitoring tools and tap into the WLAN.  Therefore, agencies must ensure that adequate physical security is in place to restrict access to WLAN components, which includes access points, servers, routers, switches and firewalls.

Pub. 1075 requires two barriers to access FTI under normal security, i.e., a locked perimeter and secured interior area. Locked means an area that has a lock with controlled access to the keys or combinations.  Secured interior area refers to internal areas that have been designed to prevent undetected entry by unauthorized persons during duty and non-duty hours. Non-agency personnel may not reside in computer rooms and/or areas containing FTI unless the person is authorized to access that FTI.

Each system component within the agency’s network that transmits FTI to an external customer through the use of WLAN must be hardened in accordance with Pub. 1075. This includes access points, client devices, switches and firewalls.

All platforms supporting the WLAN must be hardened to Pub. 1075 standards by utilizing the Safeguards Computer Security Evaluation Matrix (SCSEM).  These SCSEMs are available for download from the IRS Safeguards web site.  A vendor neutral, WLAN-specific SCSEM is also included in this library, but agencies are encouraged to review all SCSEMs to achieve overall compliance for the components that comprise the WLAN.

Agencies must implement the following controls to secure client devices:

There are two types of wireless access points called thick (intelligent) and thin. Thick APs handle authentication and encryption as well as overall management of the network clients, whereas thin APs have limited intelligence and are managed by a centralized WLAN controller.  Thin APs are generally more secure than thick APs because thin APs do not have a key that could be extracted and do not require the same level of physical security and other countermeasures than thick APs.

Agencies must implement the following controls to secure access points:

An agency should utilize Layer 2 switches in their WLAN network architecture as an alternative to Ethernet hubs.  A hub is a device that physically connects all stations on a local subnet to one circuit, but maintains no knowledge of what devices are connected to its ports. Ethernet hubs broadcast network traffic to all physical interfaces and connected devices, which leaves the broadcasted traffic vulnerable to unauthorized monitoring.  The use of the Ethernet hub infrastructure increases the risk that the AP may be broadcasting FTI that was transmitted through the hub. Switches alleviate this concern by providing dedicated channels between communication devices.

Layer 2 switching is hardware-based switching using the media access control address (MAC address) from the host's network interface cards (NICs) to decide where to forward frames.  Advantages of switches are that a switch can manage a larger total volume of data in transit at any given time, use MAC address and can support VLAN's that can help in logical segmentation of ports.

WLANs for external (guest, etc.) and internal use must be separated and devices on an agency’s external WLAN must not be able to connect through that WLAN to devices on another of the organization’s WLANs. WLANs that are used to provide guest Internet access must be architected so that their traffic does not traverse the agency’s internal networks. The guest WLAN must be logically separated from the employee WLAN using network firewalls in a DMZ. Client devices on the external or guest WLAN must only be allowed access to the necessary hosts or subnets using only the required protocols, and must be denied access to the internal network and FTI.

In addition, client devices must not be allowed to “dual connect”, where a client device is connected to a WLAN and the agency’s wired LAN concurrently, without a valid business need and a policy that clearly states the forms of dual connections that are permitted and prohibited.

It also violates the principle of disabling unneeded services to reduce attack surface; if the device is already connected to a wired network access, an additional connection to the WLAN is not necessary.

Agencies must also ensure that the confidentiality and integrity of their WLAN management traffic is maintained. This can be done through use of Virtual Private Networks (VPNs) and placing the traffic on a dedicated wired network or a virtual local area network (VLAN), in addition to using Secure Socket Layer/Transport Layer Security (SSL/TLS) for web-based management of wireless access points.

All connections to WLANs that receive, store, process or transmit FTI must use the IEEE 802.11i Robust Security Network (RSN) framework with IEEE 802.1X and the Extensible Authentication Protocol (EAP) authentication to establish a secure wireless connection between WLAN devices. The 802.1X standard provides for port-based authentication, ensuring a client device is authenticated prior to gaining WLAN access.

Standards previous to IEEE 802.11i used authentication methods such as Wired Equivalent Privacy (WEP) and Wi-Fi Protected Access (WPA), which have known security flaws and vulnerabilities, been proven insecure and therefore cannot be considered a secure standard.

WEP is vulnerable due to the manner in which it implements the RC4 stream cipher algorithm. WLANs using WEP are vulnerable to eavesdropping and unauthorized access. WPA improved upon WEP by securely implanting RC4; however, it does not provide support for the Advanced Encryption Standard (AES). WLANs that receive, process, store or transmit FTI cannot use WEP or WPA as the security standard.

WEP and WPA have been replaced by several standards, WPA2 and the IEEE standards, 802.11i and 802.1X. WPA2 does implement the majority of the IEEE 802.11i standard, but it is not an IEEE standard, and not fully compatible with the standard.

Agencies using legacy IEEE 802.11 WLAN security standards or pre-shared keys (PSK) should upgrade to an enhanced standard such as 802.11i method with IEEE 802.1X / EAP that provides security features to protect FTI.  PSKs should be avoided since these keys are derived from a passphrase shorter than approximately 20 characters.  This provides relatively low levels of security and may make the environment prone to dictionary and rainbow attacks.

For FTI transmission, the WLAN infrastructure must comply with IEEE 802.11i and use WPA2 certified devices with the following settings implemented:

A fallback method for failed wireless authentication (e.g., forgotten passwords and lost smart cards) shall be at least as strong as the primary method.

Comprehensive WLAN security assessments must be conducted at least annually to understand WLAN threats, the likelihood that those threats will be realized and the potential impact of realized threats. This allows weaknesses to be identified before they can be exploited and to ensure that the agency’s implemented security measures are working as intended.

Vulnerability scanning and assessments can be performed for WLAN components. Many modern vulnerability scanners have the ability to login to Cisco wireless devices and determine if they are running the latest firmware and patch levels. The vulnerabilities identified during periodic security assessments must be documented in a plan of action and milestones (POA&M), and mitigation actions tracked to completion.

The assessments should include a review of all AP locations and an assessment of the AP range to determine the coverage area and to ensure that communications do not extend beyond the agency’s documented boundaries.  Assessors, such as security administrators or auditors, can use sniffers to determine whether wireless products are transmitting correctly and on the correct channels. Assessors should periodically check within the office building space (and campus) for rogue APs and other unauthorized access. The vulnerabilities identified during periodic security assessments should be documented in a plan of action and milestones (POA&M), and mitigation actions should be tracked to completion.

In addition, agencies must implement wireless intrusion detection and prevention services to detect unauthorized, "rogue" access points and other wireless threats that may expose FTI. WIDS agents shall be deployed in the 802.11 WLAN where FTI is transmitted and accessed to detect suspicious behavior and unauthorized wireless access or activity.

The WIDS must detect and log the following minimum events:

All WLAN components, including client devices, access points, switches and firewalls that connect to a wireless technology or device, must ensure compliance with audit logging standards found in Pub. 1075, enable logging on APs to ensure user accountability and provide records that can be reviewed if malicious activity has occurred to better understand the nature of that activity.

The agency must regularly review the system logs to ensure that they are continuously monitoring their WLANs for both WLAN-specific and general (wired network) attacks.

When disposing of a WLAN component, the agency must remove all sensitive configuration information, including pre-shared keys and passwords in accordance with the sanitization requirements described in Pub. 1075.  In addition, the agency must ensure that its audit records are retained as needed to meet legal or other requirements.