The EITC is a vital anti-poverty tool. Here’s how the IRS preserves its integrity. 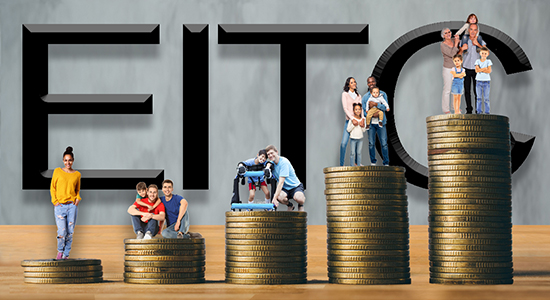 In an earlier Closer Look, I discussed the “toolkit” of compliance actions the IRS has, and how we aim to strike a balance between minimizing taxpayer burden and upholding the nation’s tax laws.

One area I mentioned briefly was our compliance actions pertaining to the earned income tax credit (EITC). I thought it might be helpful if I expanded on that topic, because of how important it is to many workers and families.

What is the EITC?

EITC has been benefitting low- and moderate-income workers for 46 years. While it has been modified several times over the years, the vast majority of the benefits of the program go to families with children.

Who qualifies for the EITC?

Whether you qualify for the EITC depends on several factors, including:

In order to claim the EITC for tax year 2020, taxpayers must meet these adjusted gross income limits:

Members of the military are not required to include nontaxable pay and if on extended active duty outside the United States are considered to have their main home in the United States for tax purposes. Clergy must include their housing allowance and disability benefits may be includable depending on the type of benefits received.

To claim a “child” for the EITC – and therefore be eligible for a larger credit – you must have a certain relationship with the child. The child must be your:

The child must live with you for more than half the year in the United States. The child must be younger than you and under 19 on December 31 of the year for which you are claiming the credit, unless the child is a full-time student, in which case they must be younger than 24. If, however, the qualifying child is permanently and totally disabled, they can be any age.

Sometimes, taxpayers claim the EITC when they are not eligible or claim a credit that is larger than what they are entitled to. This can result in what we call improper payments. There are many reasons why improper payments happen, but one of the most common sources of improper payments occurs when a taxpayer incorrectly claims they have a qualifying child.

We aim to minimize improper payments because they redirect taxpayer money to people who aren’t legally entitled to it. In addition, there are legal and regulatory obligations that require us to curtail such payments. For example, the Improper Payments Elimination and Recovery Improvement Act (IPERIA) requires the IRS to conduct an annual risk assessment to identify programs and activities that may be susceptible to significant improper payments and to report on actions we plan to take to prevent future EITC improper payments. With respect to the EITC, the improper payment rate reported by the Department of the Treasury for Fiscal Year 2019 was 25.3%, totaling $17.4 billion.

To help minimize improper payments, the IRS conducts an audit program for returns claiming EITC. We average approximately 300,000 EITC audits per year out of more than 25 million EITC claims.

There are several constraints that limit the IRS’s ability to verify EITC eligibility without contacting the claimant to request verifying information. As such, to ensure the fairness and integrity of the EITC program, the IRS annually requests verifying information from slightly more than 1% of those claiming EITC each year. Nearly all examinations of lower-income taxpayers were initiated because of claims for the EITC. More than 40% of EITC errors pertain to the eligibility of a qualifying child.

EITC exams are conducted by mail in the least intrusive manner as correspondence exams. We know how important these payments are to families, so we work as quickly as possible to resolve these exams. For context, the IRS audits higher income taxpayers at much higher rates, as I explained in detail in an earlier Closer Look.

Unfortunately, the rules around EITC eligibility can be complex, and bad actors are always looking for ways to cheat the system. There are some legislative measures that could potentially make EITC more user friendly, specifically by:

When can EITC claimants expect their refund?

According to the Protecting Americans from Tax Hikes Act – better known as the PATH Act – the IRS cannot issue refunds on tax returns claiming EITC or the Additional Child Tax Credit before mid-February. This allows time for us to better identify fraudulent claims and prevent improper payments. After you submit your return, you can check our Where’s My Refund tool for updated information.

To maximize your chances of receiving a refund as early as possible, follow these tips:

More information on whether you qualify

We estimate that approximately 20% of eligible taxpayers do not claim the EITC. We want everyone who is eligible for the EITC to claim it – after all, it’s your money. To help determine whether you qualify, the IRS has two resources:

In addition, many people who are eligible to claim the EITC can get free tax help at one of our Volunteer Income Tax Assistance (VITA) or Tax Counseling for the Elderly (TCE) sites. Remember, to receive the EITC, you must file a tax return, even if you wouldn’t otherwise have to file one.

We promote the EITC program and educate taxpayers in many ways. Every year in late January, we partner with several organizations to host EITC Awareness Day, a nationwide campaign in which we coordinate hundreds of events, news releases, tweets, and other outreach and communication products to help taxpayers learn about EITC and how to claim it. We also educate return preparers at the annual Nationwide Tax Forums and online webinars of their responsibilities under due diligence regulations, which helps to ensure EITC tax return information impacting eligibility is correct.

We also maintain a dedicated website where return preparers, employers, IRS partners and others can find information tailored specifically to them about EITC and other refundable credits. Feel free to visit it to learn more.

Sunita Lough is the Commissioner of the Tax Exempt and Government Entities (TE/GE) division of the IRS. Sunita previously served as the Deputy Commissioner for Services and Enforcement. As the DCSE, she provided leadership to the four taxpayer-focused IRS operating divisions; Wage and Investment (W&I) Large Business and International (LB&I), Small Business/Self Employed (SB/SE) and Tax Exempt and Government Entities (TE/GE). She also oversaw the IRS Criminal Investigation Division, Office of Professional Responsibility, Online Services, the Return Preparer Office, and the IRS Whistleblower Office.